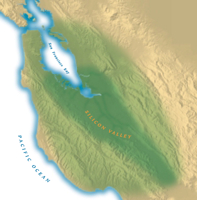 The plan to build a 1,500-square-mile Wi-Fi network is underway: Yesterday, I wrote about a couple of stories (neither online) filed in Palo Alto newspapers about what seemed to be an Intel-led effort to put together a request for proposal (RFP) for a Bay Area-spanning Wi-Fi outdoor network. I spoke with Intel external affairs manager Mark Pettinger about the details, which will be fully available soon.

The Joint Venture Silicon Valley group via a local joint government organization has asked dozens of cities and counties in the Bay Area to contribute modest funds (a few thousand each) towards the cost of preparing a draft RFP which would then, in turn, be finalized and issued for bids. Joint Venture is run by an array of local businesspeople, elected politicians, executives from non-profits, and academic leaders.

The vision expressed in planning documents that I've seen show a scope that's incredibly broad: the network would provide outdoor service to sensors for municipal projects, like water levels in creeks, to ordinary consumer purposes. The network would cover Silicon Valley's broadest definition, reaching from San Mateo in the north to Gilroy in the south; Fremont in the east and over the mountains to Santa Cruz in the west. Silicon Valley's population in this definition was estimated at 2.44 million in 2003 by Joint Venture

No business model or technology is preordained, although Wi-Fi is mentioned repeatedly. Whether it's free, fee, or baroque combinations will be determined while drafting the RFP and considering bids. It might be that ZigBee, EVDO, WiMax, Wi-Fi, and other flavors would be the ideal combination.

Intel's Pettinger said the estimated cost of preparing the draft RFP is about $60,000, and Intel has agreed to provide about 1/3 of that as in-kind services. The Intel Solution Services (ISS) division, which is a systems architecture planning group, will lead on the drafting. Intel has agreed to not put in a bid to answer the RFP. The draft will be finalized into a bidding document by Joint Venture. Intel has helped a number of communities plan their municipal network RFPs, including most recently Portland, Ore., and Tempe, Ariz., through their Digital Communities effort.

This RFP will ultimately issued by a consortium that includes 16 cities and San Mateo County at the core (a joint powers authority called SAMCAT), and could encompass as many as 26 cities and counties that would join with them. Santa Clara County, Los Altos Hills, Santa Clara (city), Morgan Hill, Palo Alto, Los Gatos, and Santa Cruz have put their money where their mouth is for the RFP already. The draft RFP should be ready in April of this year, if all goes as planned.

The story leaked out ahead of supporting documentation over the weekend because local cities and towns in the Bay Area have received the solicitation for funds to prepare the RFP, and a reporter made a call (it's how the best stories develop). Pettinger said that there's no interest in keeping this private, but the groups involved hadn't yet had a chance to draft a press release and assemble all the pieces to explain the effort.