« Macedonia-Fi on The World | Main | State of the Mesh: Six Players, No Standards »

The L in Linksys WRT54GL Stands for Linux 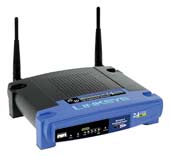 The Linux flavor of the WRT54G is still in production, despite newer VxWorks-based version: Good news for the community of hackers, developers, and experimenters who rely on the Linksys WRT54G to power their projects: while the product sold under this model number will no longer use the Linux operating system as its basis, Linksys has created an offshoot model that will continue down the Linux path under the name WRT54GL.

The WRT54G in versions 1 through 4 used free and open-source software components for its embedded operating system and most of its functions. After some negotiation a few years ago, Cisco's Linksys division released all the code they had modified as they were ostensibly required to under the terms of the GPL (General Public License) and other software licenses for components they had used. Wireless hackers immediately figured out how to replace the baked-in firmware with their own firmware images to take advantage of the WRT54G's low cost and high availability. This appeared to end with the November 2005 release of v5, which switched to a proprietary OS while halving the RAM in the unit.

The new Linksys WRT54GL, however, is the v4 version of WRT54G stabilized on Linux. It will list for $79 MSRP (Amazon.com has it in stock for $71) and Linksys expects to sell 10,000 of them per month. The firmware for the WRT54GL (version 4.30.0) is already up on the Linksys GPL Code Center. Some folks on Slashdot have complained about the price difference between this perpetuated Linux model and the cheaper proprietary OS WRT54G--but that's how the market economy works. With 120,000 potential sales per year or $8,500,000 in gross retail sales, a competitor could engineer a better box for that market.

In an interview with Linksys, they told me that they had this model in the works for some time, but didn't want to tip their hand until shipping product was available in the channel. Company spokespeople emphasized that while the "GL" model can be flashed, they don't support any firmware but what Linksys officially releases. Still, they've kept a Linux model because the market is there for it. Linksys confirmed what some analysis firms have been saying: to their knowledge, the WRT54G is the single bestselling model of Wi-Fi gateway in the world. I'm not sure what model gets the No. 2 nod.

Peter Rysavy wrote in Network Computing today about his disappointment with the disappearance of the Linux-based WRT54G--he didn't get feedback from Linksys before he filed his piece--and what he sees as the lower-stability of the licensed VxWorks operating system that underlies the v5 release of the gateway. (I've heard this from others, including a colleague as recently as yesterday.) VxWorks is a closed-source system that Linksys told LinuxDevices.com uses half the RAM of the embedded Linux OS. This lets them conserve costs in a commoditized market in which they sell hundreds of thousands of WRT54Gs per month--every dollar saved is millions a year recouped.

Linksys, by the way, didn't develop their embedded Linux, but in turn licensed it from Broadcom, who created the Linux-based code for its reference design. Reference designs are built by chipmakers to provide a ready-to-go product that incorporates their chips. They can often be bid out and built without much effort beyond designing a case and customizing or replacing an installation wizard.

I'm a long-time Wi-Fi guy and my understanding of this situation (based on comments from various industry insiders) is that many small software companies were adding significant value to the Linksys APs (like multi-ESS and VLAN support, built-in Authentication and so on) via the open Linux capability. Cisco, having bought Linksys, no longer wants people to be able to add enterprise-class AP features to cheap consumer APs. They'd rather you got those features via the more expensive Cisco APs targeted at Enterprise customers (the APs from either the Aironet acquisition or nowadays the Airespace acquisition).

[Editor's note: Except that Linksys will continue to sell the units, just at a slightly higher price. That higher price is still far below what these units sold for until the last six months or so, so it shouldn't discourage this at all. --gf]

Call me a patsy, but I buy the explanation offered by Linksys/Cisco that the reason for the change was cost; as you say, Glenn, when you sell a hundred thousand-plus of the WRT54G units a month, small costs add up quickly. That being said, I'd then also like to see a reduction in the retail cost of the WRT54G v5, since it costs less for them to build...

I had no idea about the kernel change, thanks for the heads up. I recently bought a v5 after my v1 and v3 both had packet loss issues. My v5 keeps dropping its DHCP IP from the cable modem and LinkSys tech support has quit responding to me. I'm debating being done with Linksys entirely, and buying one of these L models.

The thing I don't quite understand is that the GS has twice the flash and RAM of the G[L], but is otherwise the same, and costs about the same as the GL.

So unless (until?) the GS goes to VxWorks, what's the point of the GL?

There are still v4 units on the shelves though right? I thought I read somewhere about how to determine if the unit you were purchasing was v4 or v5 based on the serial number which is visible through the packaging (the version informaiton, to the best of my knowledge isn't.)

For those whose got packet losses after running the WRT54G (every version)for a few hours....

I got the same problem with my WRT54G v1 and thought my router was end of life. So I bought a new one, unfortunately its a WRT54G v5 with VxWorks running. This v5 has even more packet losses. So I brought back the v5 to the store and got my money back. Bought another router from USRobotics and got the same problem. After that I finally relize its not the Linksys's problem. But my own.

The problem is the default settings on the firmware is to clear the buffer every 5 days. But if you run some bittorrent, you make a lots of connections and the router's buffer will be overflowed after af few hours running some bittorrent files.

My solution was to flash it with a third party firmware, in my case the HyperWRT 2.1b1, that firmware got an option to edit the startup and firewall script in the webinterface. Then I went to search for more information and found a script to put on the start up that makes the router cleares the buffer every 30 minutes (or you can set it to 10 minutes if you like).

Now the router is running very stable, uptime almost 30 days and running non-stop 10 or more torrents at the same time.

The HyperWRT firmware can be found on www.hyperwrt.org and the startup script you should put this in...

Connection Buffer Reset Script
Wonder if that lives thru a power-off or reset, and if it has to be re-loaded each time?
What is the HyperWRT firmware reset time?
Mike

The WRT54G v5 is the first Linksys/Cisco product I have ever purchased and it will be the last.
This thing SUCKS big time - tremendous packet loss, slow speed, and all the updated firmware releases have been applied as they have come out, and DO NOT FIX this POS.
Linksys/Cisco support has stopped responding to my support requests once I give them URL references to posts of all the people having same problems & I request to have this thing replaced with a v4 product....
JUNK!

It seems to me that everyone who complains about the packet loss says they fixed it with the HyperWRT fix. However, for that to be the case, they would have to own something previous to V5.

You are one of the few people I have heard complain about this on V5 with the latest firmare *.6. I wonder if this is a bit of mass hysteria...

The *.6 firmware claims to fix bittorrent issues, and when I contacted their customer service they claimed that was to imply they fixed the issue of the buffer overflow.

So are you in fact running V5 with the *.6 Firmware update, and if so to what extent and how are you measuring loss?

The WRT54G is a POS.
I've applied ALL the firmware updates - now at .9 released 12 May 06, and the packet loss/performance issues have never gone away.
If I connect PC directly to cable modem, there is no packet loss.
I asked Cisco/Linksys to replace the POS and they stopped responding to my support requests.

I recently purchased a new laptop computer with a built in WiFi connection. I soon discovered I could connect to my neighbor?s wireless router and use it to surf the Internet. But yesterday I could only receive the most obscene pictures imaginable instead of the Web pages I wanted. Finally, last night this neighbor laughingly told me that when he realized someone else was using his service, he disconnected the wireless router from the Internet and connected it to an old computer. Then he reconfigured the router so that anytime a Web page was requested, it would instead just send a randomly selected obscene picture. But he would not tell me how he managed to do that. I know he was using a Linksys WRT-54GL. Could you post the information necessary to show exactly how this can be done?

I just got my RMA WRT54GL router from linksys, they said on the box that its been tested and evyerthing and the minute i set it up and configure it back to my old router settings, what do i get, my wireless connection keeps dropping and wired connections are so slow aswell. I think I'm done with Linksys now, might as well try out these cheaper alternatives, but I heard the apple airport extreme system is quite strong and sturdy.

I had a WRT54G v4, for some odd reason the wireless was starting to fail. No big deal.. Had the router for two years and performed flawlessly. Sent it in for an RMA replacement and they sent back a version 6, which I didn't know about until I tried to update the firmware. On their site it says they will replace the damaged unit with the same. I was on the phone for 5 hours with the customer service before they gave up and I was transfered to the RMA department where I talked to a supervisor. He replaced that piece of junk v6 with a WRT54GL. DO NOT BUY A VERSION 5 OR 6.

Update to my last comment. Loaded my WRT54GL with DD-WRT v23 SP2 within 15 minutes after UPS delivered it. Has been going strong from the minute I configured it for my home network. No signal drops, no disconnects and no worries.

I had a Wrt54g version 5 & had nothing but problems with it, I was lucky thought that the store where I bought it from let me return for a intore credit even after 3 months. I then ordered from a different store the LinkSys wrt54gl version 1.1, (the first store did not carry that model).Before I installed the router I downloaded Linksys EasyLink Advisor & ran it, (again before I installed the router) & then It the program told me to start installing the router & in just a few minutes (literly) I had the router up & running& still running flawlessly for about 2 weeks NO REBOOTS yah man.