Stand Back! He's Got a Hawking Dish! 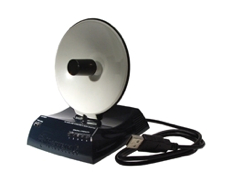 Hawking introduces USB adapter with an 8 dbi antenna: This thing looks very 1950s sci-fi retro, but produces a remarkably strong, directional signal. It has five LEDs that show signal strength, too, which should help improve directionality. It'll retail for about $70.

Now there are two approaches to reaching further with Wi-Fi: brute force and smart antennas. This is the prettiest example of brute force I've seen. But is it better than beamforming and spatial multiplexing in MIMO's finesse?

Not a huge fan of devices with integrated antennas I'd still prefer to go with a more flexible approach. Select the best access point or pc card, or router and select the best antenna for your setup. My trusty 12dbi cantenna almost always outperforms these pretty devices. http://www.cantenna.com

Looks very cool. Nice design. Although I really prefer the suction cup antenna for accessing a hotspot. http://www.wlanparts.com/product/24MPV8 easier to aim out the window.