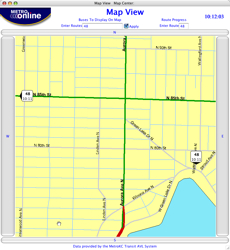 The King County Metro Transit tries out Wi-Fi on a few routes: Using the locally made Junxion Box, which relays data between a Wi-Fi gateway and a 2.5G or 3G cellular network, Metro Transit will equip all buses along two long routes with Internet access--29 buses in all by mid-October. The service will be free during trials which will last five months and run on a route from south Seattle to north Seattle and another between the university neighborhood and Federal Way, a southern suburb.

Sound Transit, a larger regional transit authority working on a light-rail system and other commuter projects, plans to experiment with a Redmond (Microsoft/Nintendo HQ) and Seattle route with five buses equipped.

Here's coverage from the Seattle Post-Intelligencer and The Seattle Times. Metro Transit runs more than 1,000 buses.

One of the routes, the number 48, stops within three blocks of my house and has run directly to my two previous offices, so you can imagine I'll be doing live trials. Both routes pass the University of Washington. The 48 is insanely crowded during morning commute, and I imagine someone with small hands and a PDA could use the service then.

Metro Transit has a variety of interesting online tools that tie in neatly with this project. They have a Java-based bus tracker (see figure upper right) which lets you see the current location of any bus in the system using their transponders. Their trip planner is also handy. If I were a frequent commuter with a handheld Wi-Fi-equipped device, I think I'd love to use it to help figure out the commute while underway.

Some Metro and Sound Transit routes are quite long and spend most of their time on their freeway, making it a more natural fit for working while commuting during time that's between down time and useful time. This is the argument for much of the commuter-Fi that I first wrote about last summer for The New York Times focusing on buses, boats, and planes.

Posted by Glenn Fleishman at 10:45 AM | Categories: Transportation and Lodging