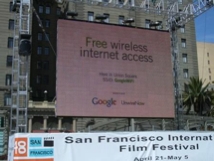 Google is sponsoring free Wi-Fi in Union Square in Frisco: I can't find out more information about it than what's in this photograph (click for larger image). One colleague I mentioned this to suggested that increasing Internet usage increased Google's ad revenue so just offering free Wi-Fi could translate into more revenue for them indirectly. Possibly. It might just be more branding effort--as if they need that, especially with yesterday's earnings news.

Posted by Glenn Fleishman at 9:11 AM | Categories: Free, Unique | 2 Comments

I don't know about you but I can't count the number of times I've been out and about with friends and some question about something comes up and I have said "if only I could Google that I could give you an answer". It's the combined wish for Wi-Fi everywhere and the utility of Google for remembering the name of that whatever it is you can't remember.

UnwireNow owns the SF city WiFi relationship. Google must have a deal w them. I used it Tuesday night from the lobby of the St Francis Hotel. Killer fast.

“I am very pleased to launch this service in Union Square,” said Mayor Newsom. “San Francisco is one of the most technically-savvy, connected cities in the world. I believe technology can improve the lives of all citizens, especially through the tremendous amount of information available on the Internet,” Newsom continued, “Now, even more citizens have convenient, free access to that information in one of San Francisco’s vibrant public areas.”

"WiFi has become an unstoppable technology that the public is beginning to demand, customers are now making buying decisions based on the availability of WiFi" said Jaz Banga President of UnwireNow Inc.