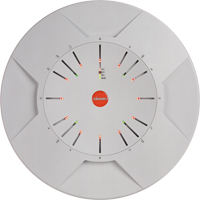 Xirrus launches its wireless LAN array: In a briefing last week, Xirrus executives explained that their product combines the utility of a wireless LAN switch with a single footprint that can coordinate frequency and signal pattern across as many as 16 channels using a combination of 802.11a and 802.11b/g with sectorized antennas. Gigabit Ethernet carries the traffic to and from the array; a redundant failover Gigabit Ethernet port and a 10/100 management port ensures throughput.

The WLAN array comes in three configuration: four ports, eight ports, or 16 ports (models XS-3500, XS-3700, XS-3900). All three models can work in 802.11a, b, or g mode for each radio, with up to 12 for 802.11a and up to four for 802.11b/g. Xirrus has baseband-level control of the radios which allows them to adaptively and dynamically change the signal strength and antenna scope. Because they're sectorized, that means each radio can serve a greater distance if needed than the typical indoor omnidirectional antenna--or back off as the RF environment requires.

The arrays have what are now required features of any switch: VLANs, multiple SSIDs per switch (up to 16), QoS, and assignment to VLAN based on authentication, SSID, or other factors. One of the radios on any model can be set to work as a monitor for security threats, like rogue access points.

The arrays can be managed using Layer 3 tunneling with a centralized platform, the XM-3300, which can handle up to 500 WLAN arrays. Because there's an extra 10/100 interface, the management can be entirely out of band of the actual network traffic. The arrays are powered with 48-volt DC which requires either direct electrical wiring for an AC adapter or the use of DC power over Ethernet--not the standard kind, but their 48-volt variety--that ties into their Remote Power System (XP-3100) at over 300 feet of Cat 5 Ethernet cable.

The Xirrus array is the logical extension of the WLAN switch concept. One of the early gating factors for WLAN switching was the necessity for all traffic to be routed from an access point back via Ethernet to a physical switch which had to manage all the data coming and going. While this added the benefit of VLAN-based roaming that was independent of a physical switch location, it also tied bandwidth to the computational and switching capacity of that centralized switch device. (Symbol's first "access port" system had only 10/100 Mbps Ethernet out the back even though it could aggregate hundreds of Mbps in its first incarnation.)

As the switch market as matured, makers have continued to wrestle with this problem by using Layer 2 tunneling to virtual switches, but there's only so much power and GigE you can throw at that problem as long as traffic must be routed. Xirrus's idea of putting centralized intelligence in a hub-and-spoke model of smarts that takes radio frequency control and switching and mixing them together is intriguing: they'll have to deliver on reduced cost of deployment, management, and increased throughput to sell their product. But there's an air of simplicity about it that should roil the WLAN switch market.

An interesting sidenote to Xirrus's rollout is that they're investing heavily in the market's refreshed interest in 802.11a: 802.11a is apparently more and more appealing to businesses as they consider rolling out voice over IP over WLAN. (See our VoWLAN blog.) With 12 nonoverlapping channels that are designed for 54 Mbps--and no 802.11b devices to slow the network down--and 11 more channels on their way, 802.11a is an extremely appealing alternative to 802.11g for voice and streaming media. It's relatively inexpensive to buy dual-band client cards, and I expect businesses to start making the switch to a/g client purchases as they move forward.

Posted by Glenn Fleishman at 7:53 AM | Categories: Enterprise