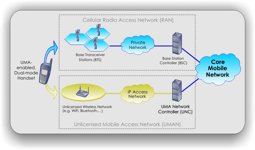 Monica Paolini of Senza Fili explains a technology you've never heard of that will soon be everywhere: Monica, a fellow Seattle-area resident, has written a long and expensive piece of analysis about UMA (Unlicensed Mobile Access), which is a way to use unlicensed Wi-Fi and Bluetooth spectrum to carry voice through a gateway to the existing GSM networks. GSM operators can then leverage their huge investment and better serve existing and new customers with better pricing and service.

I asked Monica if she could extract a high-level overview of UMA for Wi-Fi Networking News, and she obliged. Her full report, intended primarily for decision-makers and analysts involved with GSM networks, is available at her Senza Fili site. (And for those of you who speak Italian, Senza Fili means Without Wires.)

The specifications were published in September 2004 as guidelines for mobile operators and handset manufacturers, and as a blueprint for a future 3GPP standard. They are available at www.umatechnology.org. They are clearly designed by and for mobile operators, to allow them to control both cellular and Wi-Fi traffic, and to integrate Wi-Fi voice services seamlessly with their GSM networks. With a Wi-Fi cellular phone, subscribers are able to switch freely from the cellular network they use when away from home, to Wi-Fi when they enter their home network coverage, and vice versa.

UMA enables GSM/GPRS handsets equipped with Wi-Fi or Bluetooth to access the GSM and General Packet Radio Service GPRS core networks using the unlicensed air interface when available (see figure from the UMA Consortium at above right). As such, UMA represents an extension of the GSM/GPRS network for mobile operators, which can support voice services in homes, offices and hotspots both through the cellular and the WLAN networks. Subscribers using UMA can take advantage of improved indoor coverage and higher data rates, when accessing the local WLAN.

(More after the jump.)

Unlike other convergence solutions, UMA is tightly linked to the mobile core network, which is used for routing, authentication and billing. Regardless of the air interface used, the handset or mobile station (MS) is connected to a 2G or 3G core network. A call initiated using the Wi-Fi interface reaches the 2G core network through the UMA Network (UMAN).

It is important to keep in mind that UMA is not a SIP-based VoIP technology, as the core network is still old-fashioned, circuit-switched GSM. VoIP is employed to carry the signal from the MS to the UNC, over the WLAN and the broadband connection, but once transferred to the core GSM network it is indistinguishable from the rest of the cellular traffic.

The UMA Network Controller (UNC) provides the interface to the cellular core network. The UNC performs the same function as the GERAN base station and, at the core level, traffic from the two systems (GERAN and UMAN) is treated equally. UMA specifications recommend that the UNC is able to route calls through the 3G core network as well.

UMA promises seamless mobility between the WLAN and the cellular network. A call initiated within the cellular network can be transferred to a WLAN network and vice versa as the subscriber moves to areas with or without WLAN coverage. During the handoff, the MS needs to be able to maintain a connection with both networks, as it is a make-before-break connection. As a result, the subscriber will not notice delays or other changes in the quality of the call.

UMA will be relatively simple and inexpensive to deploy at the core network level, as no substantial changes are required. The UNCs (and links to the core network) are the only key new infrastructure elements that need to be introduced into the access network.

In its basic form—that is without QoS mechanisms in the WLAN—UMA does not require any change to the WLAN network either. Any AP is expected to work with UMA, although we expect that mobile operators will encourage APs that support QoS. This is because the throughput available in the WLAN and in the broadband connection should make it provide toll voice quality if no other application contends for the same bandwidth. If there is contention, however, UMA cannot guarantee the quality of a voice call or the throughput of a data connection and traffic prioritization with QoS can significantly improve performance, especially in a residential environment where traffic is likely to be less heavy than in the enterprise.

The most expensive and technologically challenging component of UMA solution is the Wi-Fi and cellular handset, because of battery-life limitations, cost, and size. To be UMA-enabled, a Wi-Fi and cellular phone requires client software to communicate with the UNC. While it may be possible to load the UMA software in any Wi-Fi and cellular phone, mobile operators are currently working on, and are more likely to market, handsets developed specifically for UMA access. Any UMA-enabled MS includes a Wi-Fi radio, which will give it access to any IP network and VoIP services (such as those from Skype or Vonage for instance). However mobile operators may decide to block this functionality, especially if they decide to subsidize the phones.

Posted by Glenn Fleishman at 10:54 AM | Categories: Cellular, Voice