The Wages of Puppets Are Ads 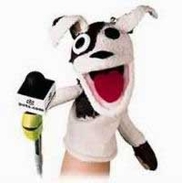 Okay, so it's my fault, but I said puppet too many times: In the world of Google advertising, context is king. There's one fellow who has built a site develop to asbestos litigation because the Google AdWords price on those words is so enormous--because of ambulance chasers or noble consumer advocates (you pick the term)--that he can make a small fortune by focusing on it.

Now, me, I used the term sock puppets. Sock puppets, sock puppets, sock puppets! I was writing in recent weeks about PR firms that set up and fund friendly institutions that describe themselves as independent and then consistently release one-sided reports that have the same viewpoint as the PR firms' client. I call these sock puppets borrowing from terminology common elsewhere, such as on Usenet.

What does Google's automated goldmining algorithm for placing advertisements on my site do? It gives me puppets. Everyone sees a slightly different set of ads at left right and middle of this page--just the Ads by Google, not our image-based banner advertisement--and if you're like me, you are scratching your head about the puppets.

And there I went again. I said puppets. We'll weather this puppet storm and return to our regularly scheduled advertising soon, I imagine. Google deprecates ads that don't perform on given pages based on clickthroughs.

This is why Adwords seems to me to be broken for bloggers and why we need publisher driven advertising.

I'm having the same problem. I posted one article about my MegaScooter and fitting some performance parts and now all I get is adverts for chinese stainless steel fasteners. When it's not doing that all I seem to get is adverts for blog systems.

I'm not sure what should be fixed here or who should fix it. But it's not working very well at the moment.

I'm pretty sure that Google depreciates as opposed to deprecates. One would be an economic device the other a grammatic device to endear oneself to others. "Eats, Shoots and Leaves", lives. The extra comma was intentional.
Regards,
Michael Muhli.

[Editor's note: It looks like Google does both: deprecate, 2nd meaning: "to express disapproval of," often used in computer lingo to mean "a less preferred form of." However, depreciate would also be correct in this context: "to lower in estimation or esteem." Thus Google depreciates and deprecates such ads.--gf]