« The Ranger Won't Like It, Yogi | Main | SBC to Launch Residential VoIP » 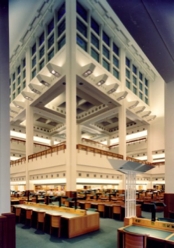 There probably is little fear of contradiction that with 1,200 Wi-Fi sessions per week, the British Library's Wi-Fi network is the most popular (and largest) in London: The library officially launched its Wi-Fi service today through its 11 reading rooms, conference auditorium, cafe, restaurant, and outdoor area. The Cloud is operating the service, providing pay-as-you-go service and allowing roaming with its many partners. HP was involved in the build-out, although the press release is vague.

The library has 3,000 visitors per day, and a survey they conducted found 86 percent of them were laptop owners; many left the library to find nearby Internet access. The library expects its service will be even more popular than the current 1,200 sessions per week with this formal announcement, and the near-term completion of a rail link that will bring people at high speed from the Continent practically to the library's front door.

People with no interest in research will likely use the library as a hotspot; The Cloud's increasing portfolio of partners should encourage that trend. (16 percent of library visitors already use it as a place to sit and work, rather than a place to research.)

This ZDNet article has a few more details, such as the £4.95 pay-as-you-go rate, but doesn't note that The Cloud's roaming partner subscribers will have inclusive access, as the press release does. The political backstory is that the library was ready to have its formal launch in September, but government cabinet shuffling delayed the opening.

The British Library has launched wireless internet connectivity in the public areas of its building at St Pancras. The new service offers wireless internet access (WiFi) throughout the 11 reading rooms, the 225-seat conference auditorium, the café and restaurant and even the outdoor Piazza area. It will enable readers, researchers and business-people to connect to the internet and access email using either their existing service provider or by using the Library’s own pay-as-you-go service.

The Library receives around 3,000 visitors a day and its proximity to Kings Cross, Euston and the forthcoming Channel Tunnel Rail Link make it an ideal location for business travellers to drop in and, using a PDA or wirelessly-enabled laptop, check their email or consult the web .

“At the British Library we are continually exploring ways in which technology can help us to improve services to our users,” said Lynne Brindley, Chief Exececutive of the British Library. “All of us are more reliant than ever upon information and communications technology and we increasingly expect to be able to have access to that technology whenever and wherever we need it. Surveys we conducted recently confirmed that, alongside the materials they consult here, our users want to be able to access the Internet when they are at the Library for research or to communicate with colleagues.”

John De Lucy, the Library’s Head of Estates and Facilities, commissioned Building Zones, consultants in providing technology that changes the way people use buildings, to undertake a user study with the aim of identifying the computing equipment that visitors were bringing to the Library and their needs for wireless Internet connectivity. The study revealed the following:

* Laptop ownership amongst visitors was a staggering 86 per cent
* The average dwell-time in the building was six hours
* Users were leaving the library to go to a nearby Internet café to access their email
* 16 per cent of the visitors only came to the library to sit down, have a coffee and use the library as a business centre

The conclusion from the survey was that there was an overwhelming demand for the service. Email was the most requested application and visitors preferred to access this from their own equipment rather than a fixed terminal. Continued access to the British Library catalogue was also a requirement.

Building Zones partnered with The Cloud and Hewlett Packard (HP) to roll out the building infrastructure, network and user support services. The trial service went live on the 31 May this year and by the end of that period the service was registering 1,200 sessions per week. With this level of usage The British Library is central London’s most active, and largest, public hotspot.

“The Library is a popular location for mobile workers and its strategic location between the three major transportation hubs of Kings Cross, Euston Station and the soon to be opened Eurostar terminal is a huge factor in attracting these users who need to be able to access email and the Internet,” said Philip Ross, Chairman of Building Zones. “This is the recognised vision of wirelessly enabled ‘work environments’ rather than locations such as cafés. In the near future, wireless technology will change building design, urban planning and how people work and the completion of The British Library project is a major success story for this technology.”

The new wireless service is operated independently from the existing Library private network infrastructure, therefore ensuring there is no security risk to critical business applications and that the Library’s private network is protected from laptop borne viruses or local hackers.

“In today’s increasingly demanding environment, connectivity is not just about enabling users to access a file or check their mail, it is also critical to deliver a high quality, secure and user friendly service” said George Polk, CEO and Founder of The Cloud. “The Cloud’s multiple service provider platform enables users to get online with their chosen provider or a pay-as-you-go service, providing flexible, intuitive connectivity for all. The Cloud is delighted to have been chosen as the platform of choice for The British Library’s wireless Internet service”.

The British Library serves around 500,000 readers every year through the reading rooms at St Pancras and offers access to resources including the world’s largest collection of patents and the UK’s richest and most extensive collection of science, technology and medical information. In addition to users of the reading rooms the Library also serves remote users around the world, satisfying between three and four million information requests every year.

For more information please contact: Ben Sanderson, the British Library Press Office. Telephone: 01937 546126 or email: ben.sanderson@bl.uk or James Walker/Karen Wells, Bite Communications. Telephone: 020 8834 3439/3447 or email: james.walker@bitepr.com/karen.wells@bitepr.com[banana][banana]The British Library is the national Library of the United Kingdom. It provides world class information services to the academic, business, research and scientific communities and offers unparalleled access to the world’s largest and most comprehensive research collection. Further information is available on the Library’s website at www.bl.uk

An economic impact assessment commissioned by the British Library in 2003 indicated that each year the Library generates around 4.4 times the level of its public funding, amounting to £363 million of economic value to the UK per annum. See the results of the assessment Measuring Our Value at: www.bl.uk/pdf/measuring.pdf

Building Zones is part of the Cordless Group company, which provides technology services that change the way people use buildings. It is a pioneer in the provision of wireless access solutions, allowing visitors to connect to the internet from their laptops, pocket devices or mobile phones.

Building Zones works with organisations to recognise that visitor connectivity is as important as employee access to a network and typically meets the needs for visitor services in foyers, conference auditoriums, restaurants and meeting rooms but can be extended to cover the entire workplace. Building Zones are currently providing the service to a range of clients including the British Library, Morgan Sindall, TSK Group and Orangebox.

Cordless Group is a collection of brands that focus on the impact of new and emerging technology on buildings and the behaviour of people within the built environment. Cordless Consultants: a management consultancy that works with companies to understand how new technology changes their requirements for workspace. It looks at the impact of technology on the design and occupancy of space, and identifies the enablers of change. Its projects range from new office headquarters to hospital and healthcare environments, schools and colleges.

Unwired: the knowledge division of Cordless Group. Its focus is on analysis, research and forecasting, predicting the new technology roadmap and visions of the future. It publishes a range of reports and holds regular briefing events for clients.

Cordless Group was founded in 1994, with the publication of the Cordless Office report, and has been a pioneer in the wireless space, providing thought leadership, knowledge and foresight to companies around the globe.

The Cloud’s infrastructure is a multi-service provider platform, which allows providers such as ISPs, mobile operators and cable companies to offer a fully branded wireless LAN experience to their customers, site owners to maximise the revenue potential by supporting all major service providers, and customers to enjoy the best possible experience and the maximum ease of use. The Cloud offers sophisticated national wireless LAN coverage with more than 4,500 hotspot locations. The company is opening more than 100 new locations each week. Launched in mid 2003, The Cloud actively partners with BT, Ericsson and Intel among others to facilitate the growth of wireless broadband services across Europe. The Cloud’s investors include 3i and Accel Partners, Europe. www.thecloud.net

It is the world's biggest hotspot! from Lockergnome's Mobile Lifestyle on November 16, 2004 10:45 PM

The British Library in London is quite impressive by serving up some 1,200 Wi-Fi sessions per week. Obviously a library that takes their wireless Internet quite seriously, this is a shining eexample to librarys everywhere. I am curious though. Are... Read More

It is the world's biggest hotspot! from Lockergnome's Mobile Lifestyle on November 16, 2004 11:12 PM

The British Library in London is quite impressive by serving up some 1,200 Wi-Fi sessions per week. Obviously a library that takes their wireless Internet quite seriously, this is a shining example to libraries everywhere. I am curious though. Are... Read More

It is the world's biggest hotspot! from Lockergnome's Mobile Lifestyle on November 17, 2004 1:22 PM

The British Library in London is quite impressive, serving up some 1,200 Wi-Fi sessions per week. Obviously a library that takes its wireless Internet quite seriously, this is a shining example to libraries everywhere. I am curious though. Are there... Read More