Apple Raises Bar on Portability, Price, and Features in a Home Gateway 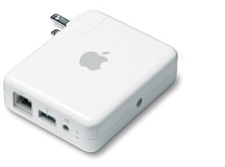 AirPort Express from Apple puts audio, print spooler, bridging, and Ethernet in one tiny package: Apple has released a seven-ounce home Wi-Fi gateway that's barely larger than a power adapter. The AirPort Express works with any Wi-Fi device, but it particularly supports streaming music through a built-in analog and digital audio jack and USB printer spooling through a built-in USB port on certain later release of Mac OS X and Windows XP and 2000.

The small device runs 802.11g with full WPA support, and handles bridging via Wireless Distribution System (WDS). Apple guarantees WDS will work only with its own devices. The AirPort Express can act as an access point and bridge at the same time. Apple's free iTunes software for Mac and Windows will have a small update this week to handle choosing a particular AirPort Express base station's attached stereo or powered speakers.

The AirPort Express raises the bar on features, as it combines print spooling, audio streaming, and WDS in one form factor. Similar features are available from many other manufacturers, but typically only as a single device (audio/photo/MPEG streaming only) or with limitations, like Linksys's WRT54G which can either bridge or be an AP, but not both.

It remains to be seen whether Apple can find a broader audience for its product with a $129 price tag when it ships in July, but its combination of portability and plugs might push it into the forefront of both the home market and the roaming traveler's world.