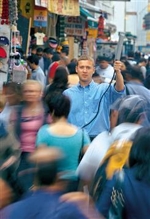 Newsweek covers all forms of wireless networking and cellular telecom across several stories this week: The package of articles opens with Steven Levy musing about why people find wireless technology so compelling. You can distill his interesting and accurate overview of the field into this sentence: The ease of distribution becomes a force in itself, pushing networks to handle more bandwidth.

It's a restating of Metcalfe's Law, in part: The power of the network increases exponentially by the number of computers connected to it. Therefore, every computer added to the network both uses it as a resource while adding resources in a spiral of increasing value and choice.

Wireless networks require substantial innovation and expense in developing the basic technology, but then each additional node has substantially less cost associated than with increasing a wireline network, whether in an office or across a city. Wireless reduces the friction in accelerating the density of network, and that rollercoaster ride into exponential power is where speed freaks get their high.

A bar at the right top of the article links to the several other pieces in the package, but I'll point out two notable pieces: The Wireless World offers a city-by-city rundown of some of the more interesting uses of wireless data, including entire towns blanketed with Wi-Fi and Austin, Texas's intense density of free hotspots. The other article to note is A Few Who Got Us Here, which puts NYCwireless co-founder Anthony Townsend in the first position alongside the founder of BlackBerry's maker Research in Motion, and a VP at Samsung.

Posted by Glenn Fleishman at 8:48 AM | Categories: Mainstream Media