Blow your mind wide open at Supernova 2002, a 2-day conference Dec. 9-10 on decentralization, and the fundamental questions facing software, communications, and media.

The above are paid, sponsored links. Contact us for more information.

Guest report on London Commercial Hot Spots: Your intreprid host is off to 802.11 Planet today (Dec. 3-5 in Santa Clara), and received this excellent report on commerical hot spots in London from Tim Woolford, an independent consultant who specializes in wireless, mobile and satellite communications. Herewith, his report:

Reading recent press releases and media comment, you could be forgiven for thinking that the coffee shops and streets of London were awash with Laptop users wirelessly connecting to the Internet. I visited three commercial hotspots in central London to find out first hand what was really happening. Armed with my laptop (running windows 98) and Netgear 802.11b PCMCIA card, I hit the streets.

First stop was Costa Coffee in Farringdon. This is a BT Openzone hotspot, although there is no indication of this from outside. Once inside, there is an Openzone logo on the wall and leaflets are available describing the service. However, in order to use the service, you first have to register at the Openzone website. It did not appear to be possible to gain access to the website unless you had previously subscribed to Openzone. The Network name (SSID) is not displayed anywhere.

I tried various combinations of BT, Openzone, etc, but could not get a connection (obviously with Windows XP this would be easier, as XP can display a list of available networks). Also there did not appear to be any power sockets close by -- so make sure your laptop is fully charged! It looks like BT expect Openzone users to have preregistered for the service before setting out. Interestingly no one else was using a laptop while I was there or later on in the afternoon when I looked in on the way back to the underground station.

Next stop was Starbucks in Fleet Street. Big sign in the window showing that this was a T-Mobile hotspot. So I bought yet another coffee, found a table next to the wall, with a power socket (every wall table had power points close by -- coincidence or is this a Starbucks design feature?). No network name is displayed anywhere; I tried T-Mobile, it worked, and I got a 100% signal. Launched IE, typed in a URL and immediately got redirected to a co-branded Starbucks/T-Mobile web page with a simple (free for now) registration process.

Once registered, I was able to browse the web and send/receive my emails. I also ran a Yahoo Instant Messenger session with a friend. Spotted one other laptop user during the 2 hours I was there. Left with a very positive impression, seems that experience gained in the US has been applied to make accessing and using the service very straightforward. It will be interesting to see what the pricing plan will be once the free trial ends. 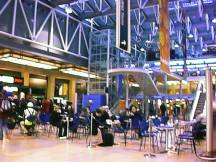 Final destination was Paddington Station to try the Megabeam service. Headed for the Lawns area of the station. Didn't see any signage for Megabeam. Fired up my laptop, tried Megabeam as the network name. It worked and I got a strong signal, again entered a URL and was redirected to the Megabeam registration webpage with an option to buy access online, if I didn't already have an account. I didn't buy any access as time was running out and I needed to catch my train, but the process appeared to be straightforward. Again I had a quick scout around but could only see a couple of people with laptops open.

Conclusions. Based on my experiences, it appears that BT is aiming for the corporate user, where they are typically preregistered, with no option for the casual user to buy access while at the hotspot. Starbucks/T-Mobile are going for the mass/SME market and Megabeam falls somewhere between the two with a range of tariff plans supporting both post pay and instant access. Although I was using a somewhat clunky setup getting access to the T-Mobile and Megabeam services was relatively straightforward, if I'd been running Windows XP, then it would have been even easier with no guessing of network names (SSID's).

However, my user experience does highlight one of the major issues with WLAN hotspots, namely roaming. If I were a 'typical' hotspot user then I would have needed three separate subscriptions to use the three hotspots. In comparison, a GSM GPRS service although both slower and costlier (per Mb) does have the benefit of ubiquitous coverage (in theory at least) and a single bill.

The second issue is demand, or lack of it ! I saw very few laptop users, maybe I picked a bad day (or time of day) but based on what I saw actual usage is low to non-existent at this stage.

We should remember how relatively young the UK hotspot business is. 12 months ago there were no commercial hotspots. My own experience reconfirms that the underlying technology is mainstream and reliable. The bigger issues will continue to be demand, roaming, and the development of viable business models for the participants in the hotspot value chain. It is very easy in the IT/Telecoms industry to get caught up in the hype and lose sight of what happens 'out there' in the real world. If you are involved in the hotspot business my advice would be to make sure you 'get out there' and see for yourself what's happening 'on the streets'.